Have you heard of Geek Girl Brunch? If you haven’t, go check it out right now.

I joined as soon as they launched a chapter in Miami, and I am not exaggerating when I say its one of the best things I’ve done in the last few years. I have met so many great people through Geek Girl Brunch (GGB) and it has legitimately changed my life.

Last weekend the Miami Chapter had their November brunch with the theme of “Mythical Creatures” in honor of the new Harry Potter movie “Fantastic Beasts and Where to Find Them”. It took me a few weeks to find the proper inspiration and I finally made the decision with less than a week before the event. I decided on one of my favorite mythical creatures: Totoro, from “My Neighbor Totoro.”

As soon as I made my decision, I knew exactly how I would make this happen, and all without having to buy a single thing! (You see, hoarding does have its benefits!)

All I needed was a grey dress, grey and white fleece, and a headband. The most complicated part was the headband. I had purchased a few pairs of kids bunny ears at Target back around Easter (yay for the Dollar Spot!) so I used one as the base for my Totoro ears.

I was crafting this all the night before, so I didn’t get any progress pics. However the process is simple. Once I had the headband and wires exposed I shaped them into the general shape I wanted. I traced this shape onto the fleece and cut out 4 times (I added a seam allowance, but in hindsight I would make it smaller, or eliminate altogether) and sewed two pairs together to make 2 ears! (Sew right sides together, trim excess fabric, and turn right side out!)

If you don’t have a sewing machine I’m fairly sure you can recreate this by sandwiching the wires in between two layers and gluing together.

I slipped them over the wires and glued down the base of the ears to the headband. To cover up the band I cut out a rectangle long enough to cover from end to end, and tapered the width to match the headband. I measured out the location for two slits through which I could squeeze the ears through, and then glued it all down with a glue gun. (I won’t show you the inner part of the headband, because like I said….I was in a hurry so it does NOT look pretty! 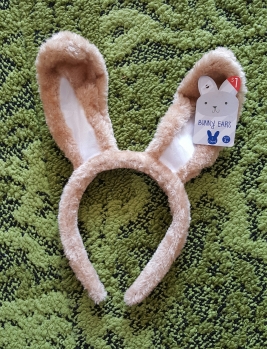 The bib was the easiest part to make. I grabbed a piece of fleece, eyeballed the width and height I wanted, and cut out the shape with scissors. I cut out and glued the little crescents with a glue gun. Once dry, I safety pinned (from the inside) to the front of my dress. Definitely not the most impeccable items I’ve ever made, but it was quick, fun, and dare I say cute! 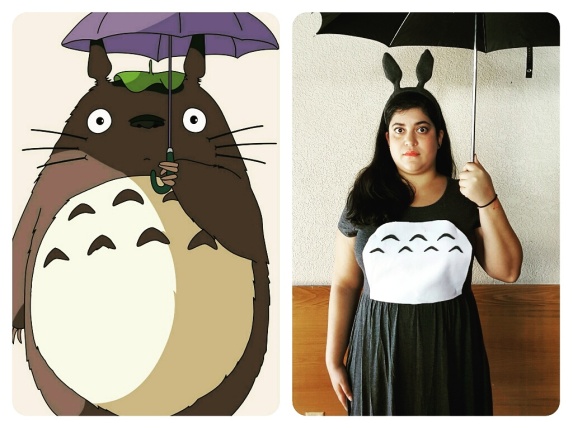 Geek Girl Brunch always does a fantastic job at the brunches. If you consider yourself even mildly geeky I’d suggest you check it out! The brunches are very popular, thus a bit difficult to get into, but so worth it! (Did I mention there are swag bags?!) 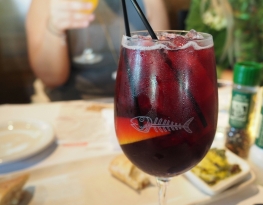 This site uses Akismet to reduce spam. Learn how your comment data is processed.

Yes please, and thank you! Raleigh, you were a delight! I'm willing to forgive the 90+ degree weather we had to put up with, but only because your hospitality, great food, and excellent beer made up for it. If you're ever in Raleigh, be sure to stop by @trophybrewing. They have several locations, but we went to the one with pizza (because, duh). It gets a bit crowded, but it was worth it! Pictured: Might be Giant. Sits at 9.4% abv, but oh so delicious. #trophybrewing #pizzaandbeer #raleighbeer #beertravels
So who has been out to @strangebeastbeer already?? I will admit, its quite a trek out West for me, but damn was that a good pizza! Best of all, they're starting to add their own beers to the menu! Pro-tip: if you're lactose challenged they'll substitute vegan cheese upon request!! 😉 (Pictured: mushroom pizza with vegan cheese)
I was pretty upset when I couldn't buy this Bananya cap during my trip last week (they couldn't get the security tag off and it was the last one!) BUT I'm happy to say I bought one online that night and it arrived today!! Dreams do come true!
Damn good tacos from @taco.innmx last night. And the beer was excellent as always. I started out with an @oddbreedwildales Citrus Farmer and rounded out the visit with Gold Shoes and Extra Thai Rack (quite easily my favorite beer from them. 🤤 )
I'm still upset that we JUST found out about the @pompomsteahouse in St. Pete, even though its been open for 4 years! We fell in love with them in Orlando, but we're in the Tampa/St. Pete area way more often. You better believe we'll be back!! Pictured, their Asian pulled pork sandwich on sourdough with a peanut noodle side. #pompomsteahousestpete
It's Friday, so here's a picture of a happy donkey.