Truth time: I’m not much of a Halloween person. [gasp]

I know, I’m weird. I don’t like horror movies and I don’t care for Halloween parties (sweaty costumes, creepy masks….no thanks) so I’ve never felt a big motivation to spend money on Halloween decor or outfits.

This means that whenever I do dress up, its gonna be DIY, and its going to be cheap! Of course, this project fits that criteria perfectly!

This project is super simple as far as materials go, but a little challenging if you’re new to using a glue gun (or just awkward in general, like me). That being said, the materials are super cheap so its hard to get mad if one comes out wonky!

You will need the following:

Lay out a piece of parchment paper and with the hot glue create a spiderweb. You can either freehand (which is what I prefer), or you can draw the shape you want on the parchment paper and follow it. I found that the “best” looking spiderwebs have 4 intersecting lines. 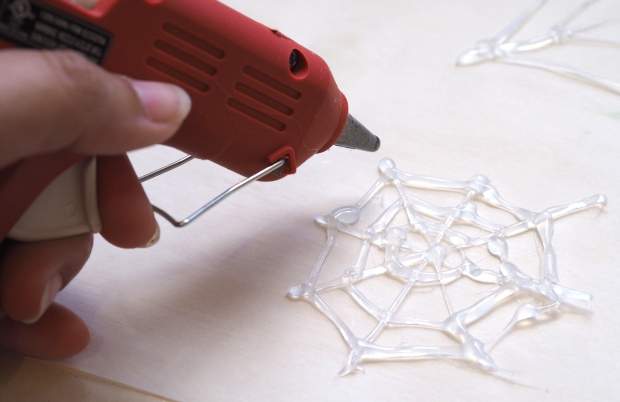 This is the hardest part of the project. Practice getting an even flow out of the gun, but if you get clumps here and there it just adds to the charm! I find that moving slowly is easier for me, but it may depend on how your gun warms up the glue. Don’t worry about the strings, you can either pull them off later, or leave a few in for a more “webby” look.

Once the glue dries up (should only take a few minutes) take a paint brush and go over your spider web. Do the back part first, let it dry. Flip to the front, and paint.

Step 3: Attach your hardware and its ready to wear!

Told you it was easy!

I can’t wait to use this technique to make other glue gun crafts!

Have you heard of Geek Girl Brunch? If you haven’t, go check it out right now.

I joined as soon as they launched a chapter in Miami, and I am not exaggerating when I say its one of the best things I’ve done in the last few years. I have met so many great people through Geek Girl Brunch (GGB) and it has legitimately changed my life.

Last weekend the Miami Chapter had their November brunch with the theme of “Mythical Creatures” in honor of the new Harry Potter movie “Fantastic Beasts and Where to Find Them”. It took me a few weeks to find the proper inspiration and I finally made the decision with less than a week before the event. I decided on one of my favorite mythical creatures: Totoro, from “My Neighbor Totoro.” 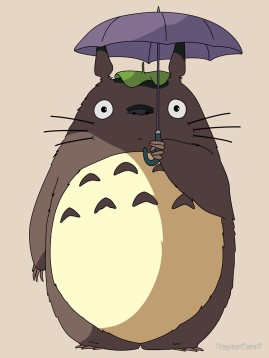 As soon as I made my decision, I knew exactly how I would make this happen, and all without having to buy a single thing! (You see, hoarding does have its benefits!)

All I needed was a grey dress, grey and white fleece, and a headband. The most complicated part was the headband. I had purchased a few pairs of kids bunny ears at Target back around Easter (yay for the Dollar Spot!) so I used one as the base for my Totoro ears.

I was crafting this all the night before, so I didn’t get any progress pics. However the process is simple. Once I had the headband and wires exposed I shaped them into the general shape I wanted. I traced this shape onto the fleece and cut out 4 times (I added a seam allowance, but in hindsight I would make it smaller, or eliminate altogether) and sewed two pairs together to make 2 ears! (Sew right sides together, trim excess fabric, and turn right side out!)

If you don’t have a sewing machine I’m fairly sure you can recreate this by sandwiching the wires in between two layers and gluing together.

I slipped them over the wires and glued down the base of the ears to the headband. To cover up the band I cut out a rectangle long enough to cover from end to end, and tapered the width to match the headband. I measured out the location for two slits through which I could squeeze the ears through, and then glued it all down with a glue gun. (I won’t show you the inner part of the headband, because like I said….I was in a hurry so it does NOT look pretty!

The bib was the easiest part to make. I grabbed a piece of fleece, eyeballed the width and height I wanted, and cut out the shape with scissors. I cut out and glued the little crescents with a glue gun. Once dry, I safety pinned (from the inside) to the front of my dress. Definitely not the most impeccable items I’ve ever made, but it was quick, fun, and dare I say cute!

Geek Girl Brunch always does a fantastic job at the brunches. If you consider yourself even mildly geeky I’d suggest you check it out! The brunches are very popular, thus a bit difficult to get into, but so worth it! (Did I mention there are swag bags?!)

When inspiration strikes, you just have to run with it. Even if it means people will look at you funny as you explain to them why you are saving that box of Star Wars macaroni and cheese. (Hint: it wasn’t for eating.)

It wasn’t until I was going through my 3rd box (of a 4-pack) of Star Wars Kraft mac & cheese, as I watched an X-wing traveling along the bottom of a pot of boiling water, that I got the idea….I was going to make macaroni art! A macaroni frame! Yes, it was totally going to work. 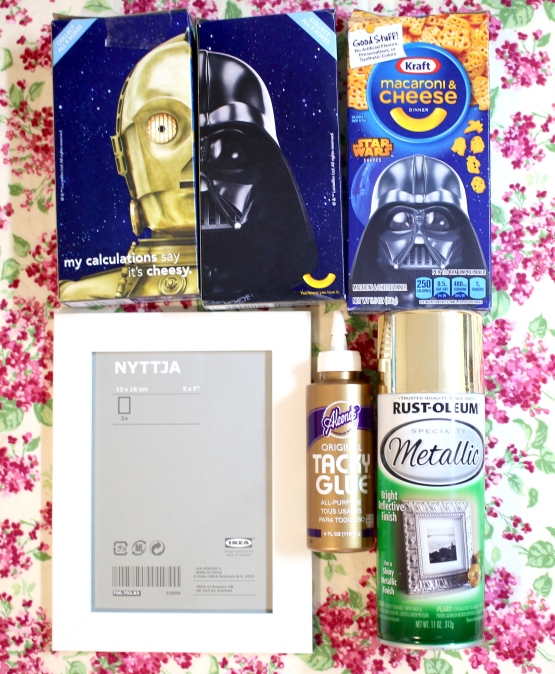 Spoiler: one box was enough to make 4 frames.

I somehow convinced Nabila (of Nabzillla.com) to join me in these shenanigans and she was kind of enough to take all the photos used in this post. 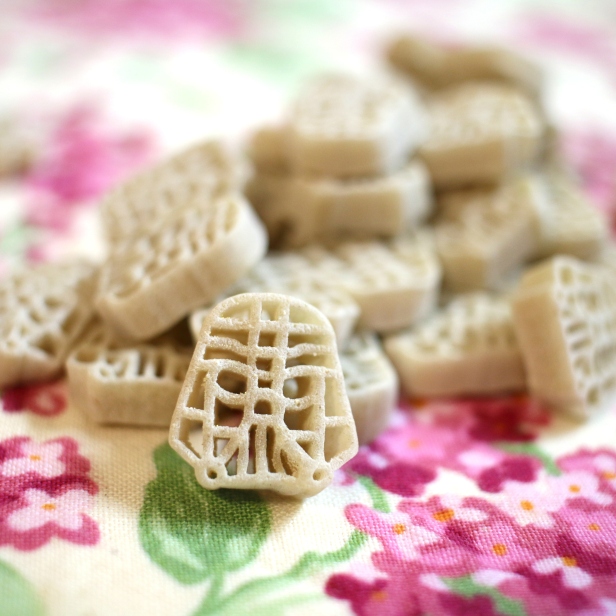 The process was simple in theory: take a simple flat frame, glue on the macaroni, paint. 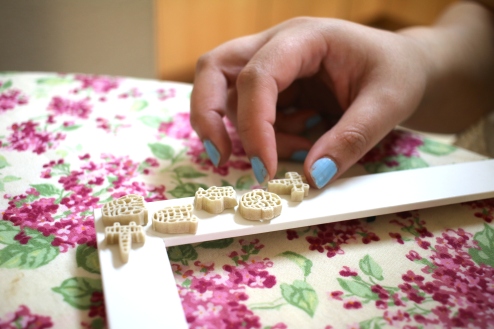 In practice: you really shouldn’t be spray painting on a windy day. Especially not in a parking lot full of leaves. 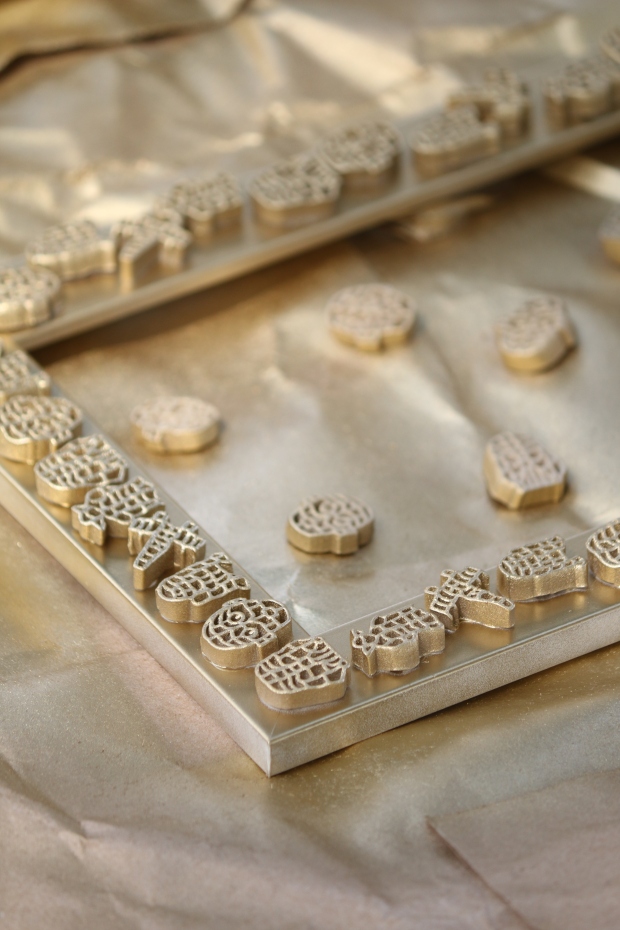 My original idea was simply to make a frame, but considering that both of us have recently developed a pin-collecting habit we thought this would make a perfect pin display! Just cut out a sheet of cork, glue to the back of the frame, and we’re done!

I must say, I’m embarrassingly pleased with the end product!

A special shoutout and THANKS to Nabila, of course, and also the awesome pin designers that made our pins!

The Stag Beetle is by Kristina Micotti, Unicorn Piñata by Luella, and the Pink Burger by WinkPins.  (Tell them Sabrina Clementine sent you!)  😉

The Handbook for the Recently Deceased is by Two Ghouls Press, and the Gameboy Cat is by Kawaii Kollective.

Sometimes you get something into your head, and there’s no way to get it out except to force it out. This was one of those times.

I got it in my head I wanted to make a candy heart garland for Valentine’s Day, so one random night I got home, pulled out some yellow felt, and started working. I stayed up much too late, and in the end I made….well, a creepy looking heart that was completely the wrong shape, with some lame looking letters. Not what I was going for. Frustrated, I put the project aside and gave it up as a failure.

But it wouldn’t leave me alone. I decided to try again….this time with fleece. And instead of embroidery for the letters  I’d cut them out of felt.

The moment I picked out my fabric colors at JoAnn’s I knew I was headed in the right direction….I mean, how cute are these colors?!

For the shape, I wanted similar proportions to traditional candy hearts without making them flat on both sides. It took me a few rounds of trial and error to finally get a shape I was happy with.

Once I had my template ready to go I cut out two hearts from each of the fabrics.

The process of actually making the hearts after this was pretty quick and easy….I sewed all the way around with roughly 1/4″ seam allowance, leaving 1-2″ open, then I flipped and stuffed. The last step was to hand sew that 1-2″ opening to seal in the filling.

My favorite part of the whole process was making the letters. I’ve always enjoyed cutting letters out of construction paper. I find it oddly therapeutic.I purchased a couple of sheets of fuchsia felt from JoAnn’s which I cut into 1″ strips (for a consistent height). 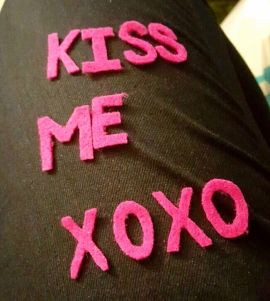 In my research, I was amused to find that candy hearts nowadays often say “Txt me” or “Email me”. There was none of that around when I was a kid! I went with the traditional “Be Mine” and “Kiss me”….and decided to throw in a “Bae” reference since, you know, I’m cool and stuff… (“cool” is still a thing, right?)

Because I wanted the flexibility to take these on and off a garland (not ’cause I’m lazy or anything…) I used safety pins to attach a ribbon to the very top of each heart.

Last step: string a ribbon through those babies! I did tie a loose knot at each to maintain the separation between them once they got hung up.

In the end I’m very pleased with how they turned out! They’re far from perfect, but they make me happy!